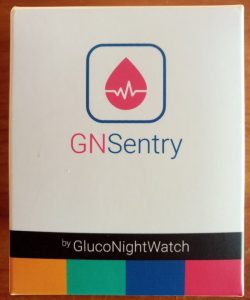 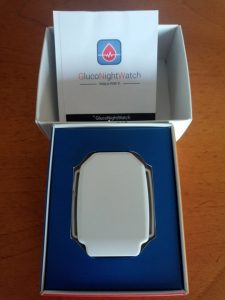 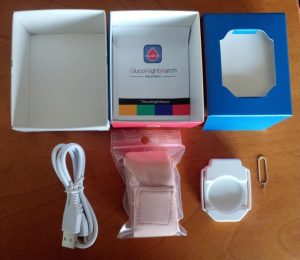 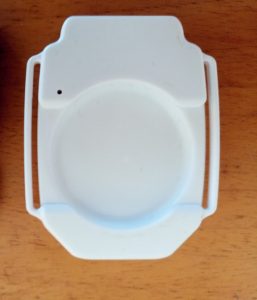 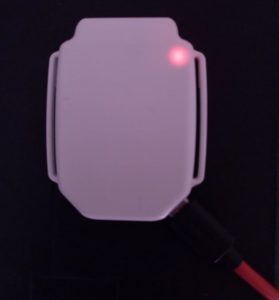 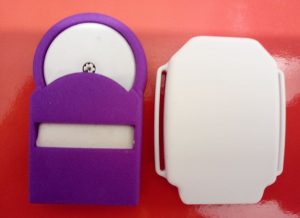 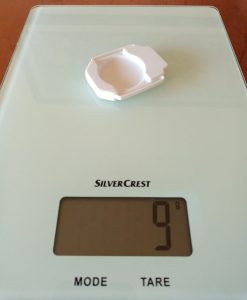 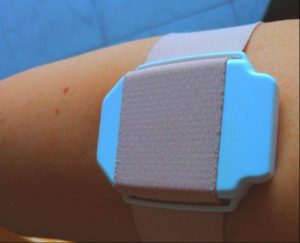 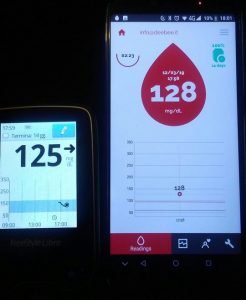 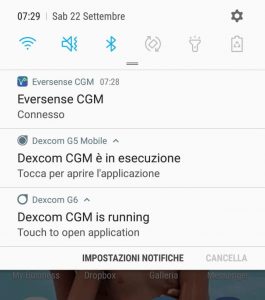 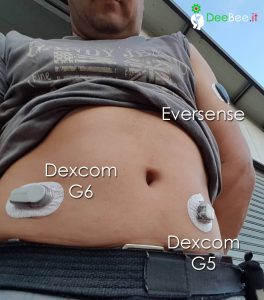 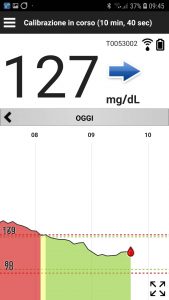 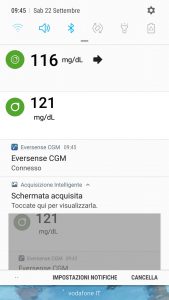 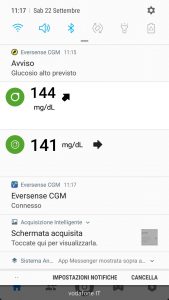 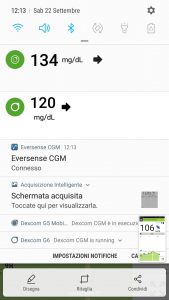 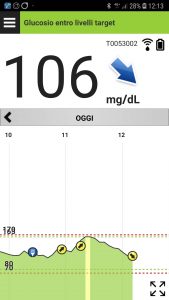 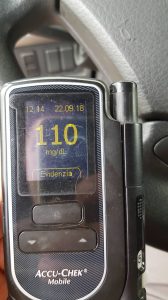 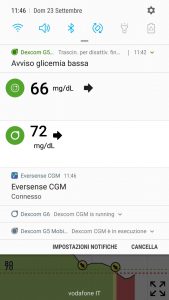 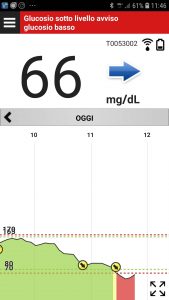 This article has been translated with an automatic algorithm. We are looking for volunteers to translate our free services and articles into English. If you are interested, please contact us here: info@deebee.it.

I had the opportunity to have Miao Miao a few weeks ago and realized that in order to use it immediately I would have to learn… Chinese. A language not very close to mine. Being tough in nature, I did not pull back. 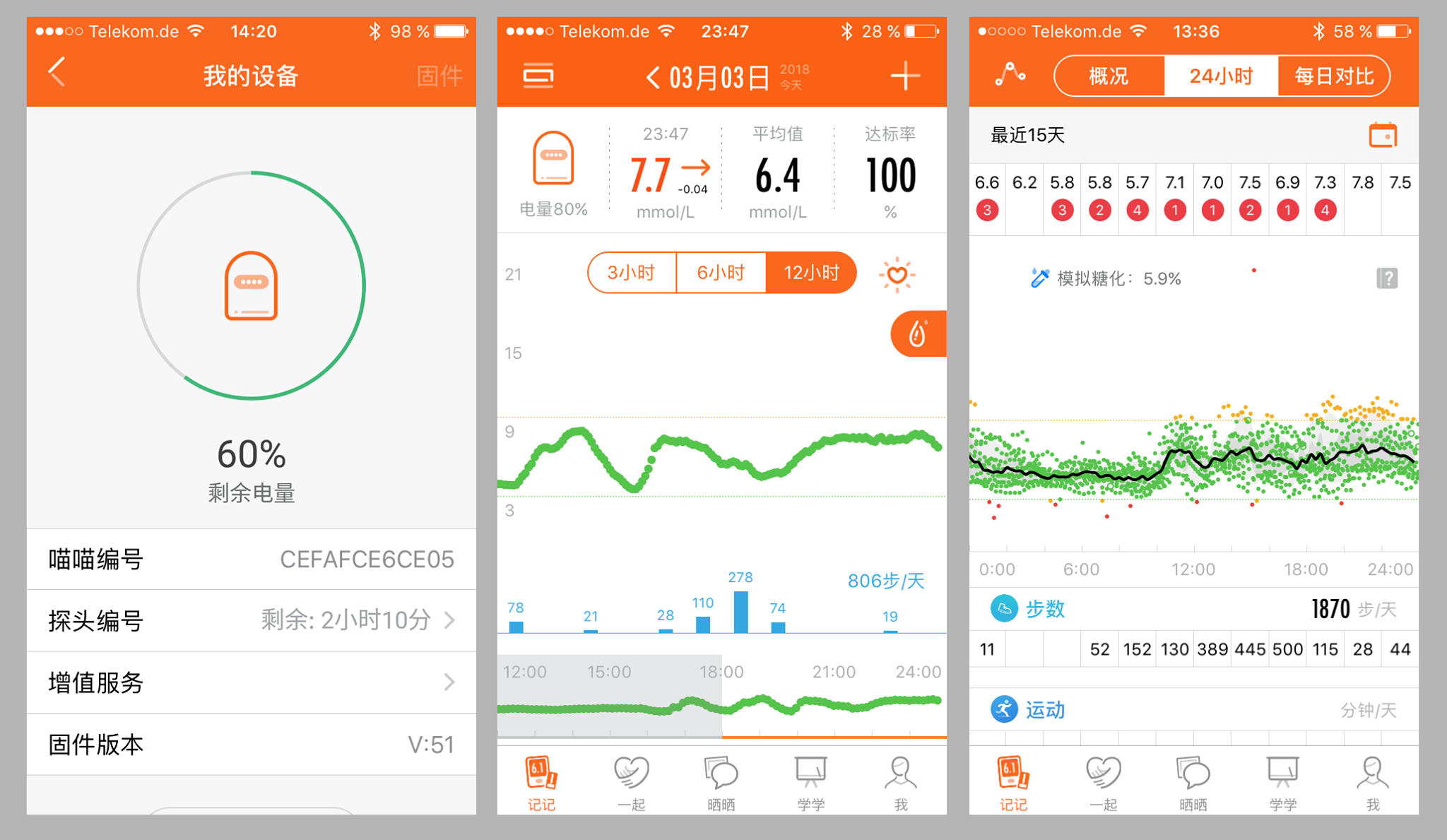 I couldn’t wait; I got stuck with impunity and I did! It took a few days before I could use the app with my iPhone. Apart from the language difficulty, which can be overcome as soon as the English version is released, the app is quite complex. But it is also complete and, in addition to the usual options, gives the possibility to exchange information and compare notes with other people who use it.

Day by day, I have understood more and more and my enthusiasm has increased. Within two weeks, I had my blood sugar readings every 5 minutes, there were no problems or disconnections. And that’s not all: blood sugar values were also transferred in parallel to Apple Health. 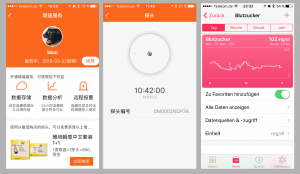 To my surprise I realized that after two weeks and a few hours of use, the remaining capacity of the battery was 60%! 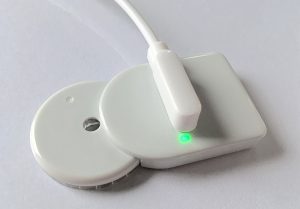 The second FreeStyle Libre in CGM is being tested with my Samsung S4 mini with xDrip + (special). After 5 days and 4 hours, the battery still shows 80%. 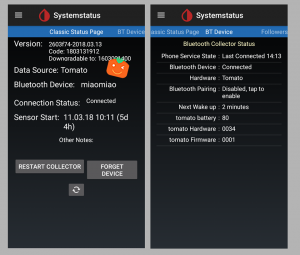 If the communication between xDrip + and Miao Miao remains as good and stable as the original Chinese app, it will be a really wonderful thing! And I would be even happier if Miao Miao were integrated into Glimp!

This article has been translated with an automatic algorithm. We are looking for volunteers to translate our free services and articles into English. If you are interested, please contact us here: info@deebee.it.

Only two weeks have passed since our readers started using Glimp for Web, the latest project by DeeBee. it, the result of careful programming work that allows us to see the FreeStyle Libre sensor’s remote blood glucose in a completely new and extremely easy way. No complicated procedures, but a simple DropBox account and sensor values will be visible from any device.

The many suggestions and the great interest (more than 5000 accesses already made on the portal) have given a new boost to our accelerator. We have added new options and services, useful for both management and data sharing. Obviously, as always, the services are free and extremely simplified, in full DeeBee spirit.

A new button appears in the portal: statistics button. By pressing it, you access the dashboard that provides information about the patient’s blood sugar history.

The first information is shown on the summary table, which shows the most significant values: average blood glucose, median, percentages that indicate how long we have been in hypoglycemia and hyperglycaemia, standard deviation, and the inevitable glycemia estimated. All this, divided into three columns representing the short, medium and long term. 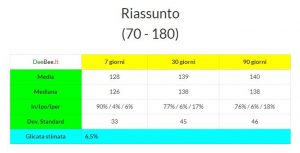 The percentages that, remember, give us a relative representation of the period spent in the target, are then reported visually, through three cakes concerning the last week, the last month and the last quarter. 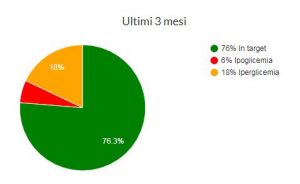 Very useful for correcting both the basal bands (for microinfusions) and the boluses, they follow the three graphs that report the five significant percentiles: the band between 10° and 90° in light colour, the band between 25° and 75° darker and, finally, the demarcation line of the 50th percentile of blue colour. The closer and narrower the bands are, the more homogeneous the blood sugar management is with varying days; the more bands converge towards the blood sugar target, the better the management. 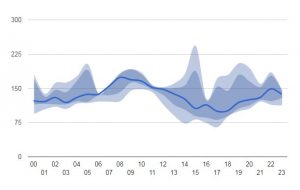 With the new service, it is possible to share these statistics with your diabetologist: simply provide him with the user and password of his Glimp system (which is based on DropBox, of which we suggest the creation of an ad hoc user). In this case, the statistics will also be available to the doctor at the following address:

If your therapy has different ranges, simply access the portal settings and change the hypoglycemia and hyperglycemia thresholds.

Given the increasing diffusion of DeeBee. it and Glimp, a final pleasant surprise concerns users from countries where blood glucose values expressed in milligrams per decilitre (mg/dL) are not used, as we do. Also among the settings, it is now possible to change the units of blood glucose measurement in millimoles per litre (mmol/L) which, let’s remember, is the one adopted by the International System and, as such, represents the reference standard worldwide. If mmol/L is selected, the statistics will also be redrawn in the new unit. 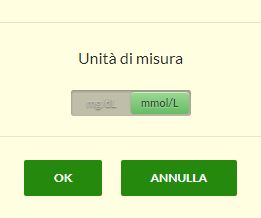 Future developments: translation (and the search for translators)

What will the future hold for us? Surely, the ability to view the portal of Glimp for Web also in other languages. We take advantage of this to remind you that on Deebee. it it is already possible to choose the language of view of our articles. To do this, simply choose the language from the side menu “drop-down” in the upper left corner. If you are reading from your smartphone, you can find the “curtain” scrolling towards the bottom.

Are you interested in joining us, helping us in translations? DeeBee. it is constantly looking for volunteers of any nationality who translate articles into their native language.

Please write to us at: info@deebee.it